Lino, the smartest cat on the block 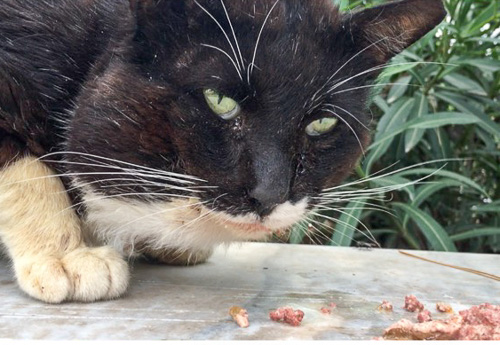 Lino showed up with a big abscess on 16th of May 2018. A week later, after several failed attempts to trap him, his abscess bursted and left him a big open wound under his neck. 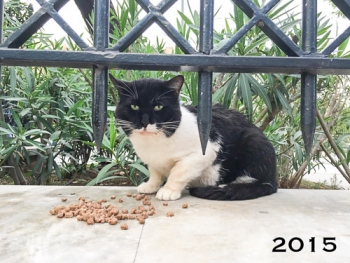 Lino appeared in one of our colonies at the very beginning of 2015. At that time he seemed to be suffering from a toothache.

“Lino’s curse is Lino’s predominant characteristic: he is simply too smart.  Quickly after his first appearance in 2015, he learned to distinguish traps from boxes, tasty treats from normal wet food, Nine Lives volunteers from the rest of the people. He is probably one of the cats that took us longer to catch for neutering, almost two years, because whenever we were planning his capture, he could smell our intentions from the distance and he avoid us completely. His perspicacity required our most experienced trapper, Eleni, and lot of trials.

After three years of daily feeding, he still amazes us with his intelligence. In his community, in the Acropolis area of Athens, he was the first to realise that moving a little out of the main feeding spot, therefore avoiding some competition, in general guarantees more wet food only for him.

But the street is a tough place, even for a smart guy like Lino. One day he got hurt and, as usually happens with community cats, the scratch led to an infection that led to an abscess. While abscesses are not particularly dangerous for trustful cats, Lino’s elusiveness made his treatment very difficult. The situation became severe for sweet but evasive Lino and his fully open abscess. Furthermore, after two years of trapping attempts for his neutering, Lino knew all our tricks! 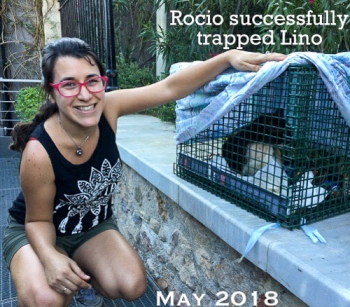 Volunteer Rocio was determined to get Lino for treatment; her patience and perseverance finally paid off and she successfully trapped the uncatchable Lino.

It required a two-people team, a lot of patience and the nicest treats we could find, to convince him to get into a trap. Lino spent three weeks under direct veterinarian treatment, with the vet cleaning and monitoring his gigantic wound, to avoid further infections. Finally, on June 20th, he returned fully recovered to his community, to continue enjoying the company of his buddies, and the daily care of our Acropolis feeding team.”