A rescued cat’s struggle for health

Freddie enjoying the lap of his forever mom, Jill!

We are happy to share with you the story of Alkis, our gentle giant colony cat. Always a lover never a fighter, this kind ginger boy spent many years in a colony. But when he developed a polyp in his ear and a deep-rooted associated infection, requiring complex surgery and hospitalisation, we were concerned that he wouldn’t be as vigilant to survive street life, so we put him up for adoption. The odds were stacked against a stray, senior cat with a slightly tilted head, so he waited a long time until, miraculously, he got an enquiry from an adopter who seemed simply perfect. To our disappointment, he tested positive for FiV which is almost always a deal breaker. However Jill and her husband stayed calm, did their research and decided to move forward and adopt Alkis anyway, to join their family of two calm, spayed cats. So now Alkis has a new name, Freddie, a new home and a new family who will give him the cuddles he desperately asks for! We cannot express enough gratitude to them for choosing to be educated and enlightened instead of scared. We invite you all to research, and give a chance to an FiV cat. We have a few still waiting and hoping to be as lucky as dear Alkis, like sweet Grissino, also a kind and wonderful senior ginger boy.

Freddie back when he was about to enter foster care!

Freddie enjoying the lap of his forever mom, Jill!

Grissino, another FiV positive senior cat, is hoping to have Freddie’s luck and be adopted soon!

Keira was found as a sick kitten on the street and abandoned by her rescuer at the vet where she spent months in a cage. The vet asked for help and our lovely volunteer Anja fostered her for a long period until she had to leave Greece. Keira was a lovely but fragile cat, with lots of ups and downs. During her healthy phase there was interest but when someone would offer her a home she would relapse. On the day when we had no-one to foster her and no place for Keira to go, we got an email from a young man, Christos, asking for info. Two days later she was in his arms. The rest is history… A match made in heaven, they both saved each other. 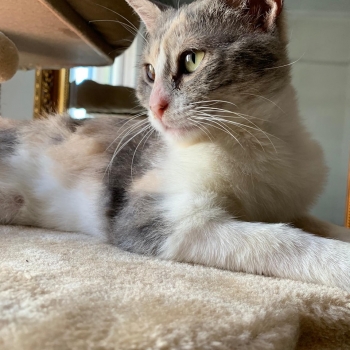 Keira on her golden throne, living a happy life with her human, Christos. Keira in her first foster days, a sickly kitten with lots of ups and downs.