Meet the New Board 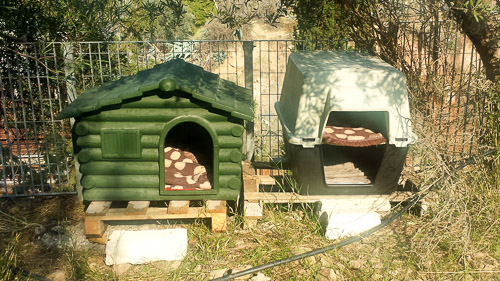 The ‘cat village’ gives the cats shelter and warmth during inclement weather.

It all started with a SOS appeal posted by an individual on Facebook, sometime around the end of July 2017. Through numerous shares the appeal reached our page. The SOS was about a skeletal black kitten, with eyes so badly infected and full of pus that the kitten had gone totally blind. The pictures attached to the appeal were shocking. Nine Lives volunteer Elena rushed immediately to the place but didn’t find the kitten in question. However, she did find a big colony of cats all suffering from flu problems, among them another semi-blind kitten that she took in immediately to our vets.

Blind tabby Cordel, rescued from this cat colony, is still hoping for her forever home

The next day, another message came to us regarding the same place and the need for help. Only this time the appeal was an overwhelming surprise to all of us. The author of the email told us that the sick black kitten we had been looking for the day before, had already been taken in by a couple who accidentally passed by the spot, saw it and without any hesitation took it immediately to their vet for treatment. The couple already had four cats of their own, all former strays and all cats with special needs. Seeing the poor kitten almost dying there, they felt they had no choice but to take it. The author of the email also included an extremely generous offer to cover all the expenses for treatments and neuterings of this colony where the sick kitten had been found. 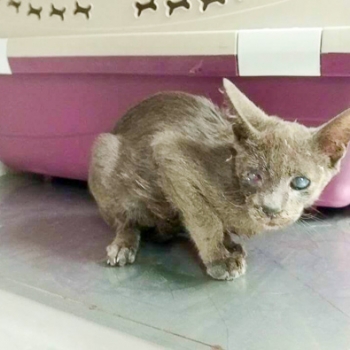 Pavel was one of the first kittens found by Nine Lives there. This photo was taken at the vet just after his rescue. 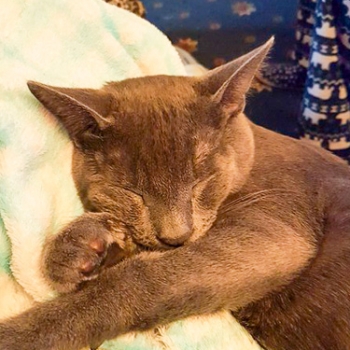 Handsome Pavel now weighing 4kg and adored at his home.

Two Nine Lives volunteers, Elena and Christina, were the first to offer their help in the area. With the help of Eirini driving, on their first visit they managed to trap 12 cats for neutering, and 4 more on their next visit. Two more blind cats were found in the colony and removed instantly. Pavel, one of the two, enjoys now a happy life in his forever home in the UK and Cordel the second blind kitten is currently fostered and is waiting patiently for a forever home. The black sick kitten, thank to which everything started, has been adopted by the couple who rescued it and he is now a gorgeous little panther. The semi-blind tabby kitten that Elena picked up, meanwhile, after fostering at volunteer Zoey’s house for two months, has been very happily adopted and is now named Elvis Alfons and best friends with his new adoptive brothers Piri and Schnurzi.

Since July, the colony is monitored on a weekly basis by Elena and Christina who visit their paw -friends, checking on their health status and also following up future neutering in the same colony, since some of the cats were not old enough to be neutered/spayed the past months. Also a feeder, local resident, is supplied with dry food, generously donated by the same lady who offered the donation. In November, Christina and Elena went a step further in their care for the colony. A tiny cat village was designed and constructed in a safely fenced area, to provide a warm and safe shelter for all the members of the colony for the winter ahead. Neutering, feeding and love have transformed this colony’s image from a sick one to an admirable one! Our paw friends have grown to be awesome and lots of people passing by stop to admire their beauty, comment on their good looks and health, and taking photos of them.

One person’s initiative and her generous donation, along with our volunteers’ hard work, can improve immensely the lives of the strays. We do our best but we can do so much more with your help.