Colleen, foreground, feeding one of the cat groups with fellow volunteer Eleni

I moved to Athens for work from Australia with my husband Andrew in May 2016 and we couldn’t leave our beautiful tabby-tort rescue cat ‘Schniff’ behind. So after a long, arduous journey and many thanks to Jetpets transport we settled in Akropoli, our new home. 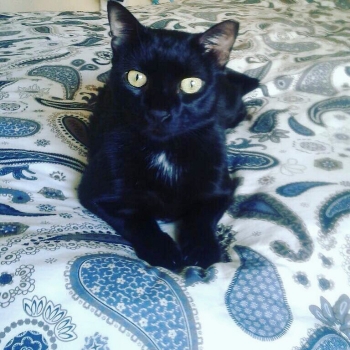 Immediately we fell in love with the area, especially the gorgeous back lanes of Plaka, but we couldn’t help noticing how many kitties there were wandering the streets and charming the tourists and locals alike. Andrew came home one night after meeting one of the Nine Lives volunteers out feeding cats and told me about the charity’s incredible work. I quickly joined the Nine Lives Facebook page and volunteered to help.

The amazing Eleni showed me the ropes over the next two weeks and I quickly learnt of her lifetime passion and care for the cats. Monday night became my regular night for volunteer feeding. I met characters like Crooked Face, Kiki, Homer and many other furry friends in the local cat colonies. Later I also assisted with feeding other Nine Lives cat colonies, where I met another member of this inspirational team, Cordelia. It was during my time feeding at these colonies that I met a lovely but very lonely black cat with a white star on his chest. He was so affectionate he would stand on my feet to stop me leaving… He had been abandoned with two black-and-white cats, both of whom tragically disappeared, and this boy was left all alone. I got to name him ‘Midnight’. Andrew and I discussed the idea of adopting a cat here in Athens and how a newcomer would fit in with our lovely ‘Schniff’. The journey started with the adoption process and Midnight was the obvious choice. Nine Lives were amazing with helping to get his shots and tests, and then on August 16, 2017 which is coincidentally Andrew’s birthday, Midnight came to live with us.

After some initial testing days he accepted his new environment and even won over his step-sister, despite the obvious language difficulties! We affectionately now call him ‘Blackie’. Since then I have been involved with Nine Live Bazaars and my work colleagues at Excite Holidays have often donated to help raise the necessary money for regular feeding, trapping and releasing plus vet care.

I’m honoured to be part of this wonderful organisation, and would recommend anyone who loves cats to get involved even in the smallest way. You’ll be surprised what a difference you can make and how rewarding it is.