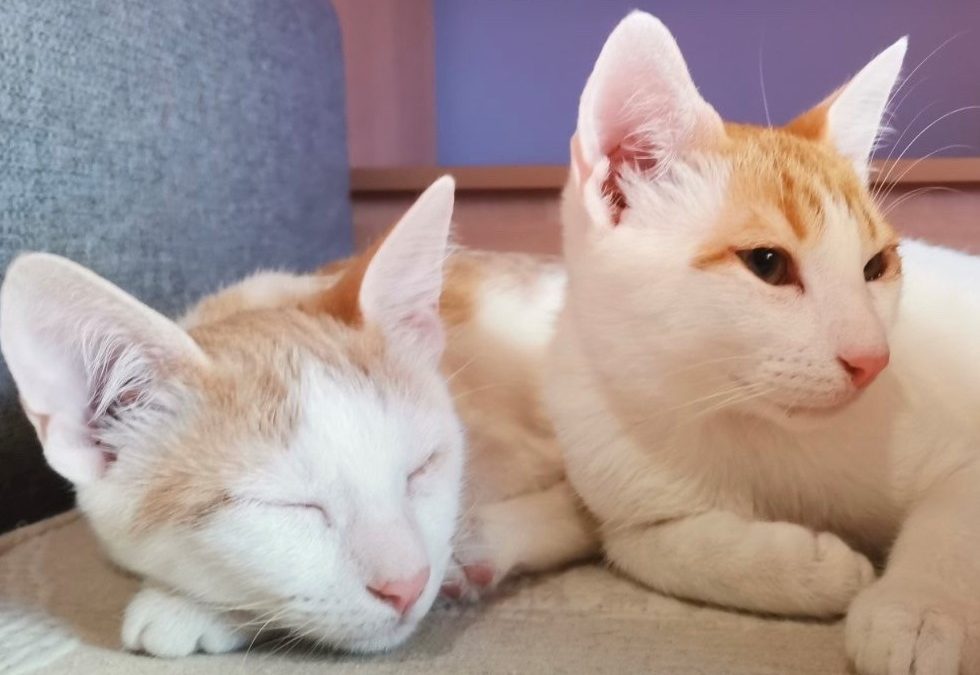 Pipilas and Mpezes are the cuddliest twin cats you will ever meet. Someone abandoned them together with their six siblings outside a vet’s clinic in a broken cat carrier. The kittens back then were just two months old. The vet found a home for the three of them, and the rest came to our care. The twin boys are the only ones without a home yet.

Pipilas means the one who suckles in Greek. He took this name because he loves suckling your ear lobe, while kneading your face. He loves children and lets them cradle him like a baby. His fur is mostly white with a few ginger spots and his body is lean and strong. Pipilas might be shy and timid when meeting new people, but once he gets to know you he shows his true, very tender and sweet personality. His brother helps him a lot to come out of his shell.

Mpezes took his name after a traditional Greek dessert. This twin is the outgoing one, confident, the alpha male of the two. He loves to jump from a height and land on your shoulder where he stays like a parrot following you around! Mpezes loves licking your hair and will hug you like a human, putting his front legs across your neck while licking and kissing your face. He too, loves kids and they both sleep with the little girl of their foster home every single night. With a strong body suit for acrobatics this guy needs extra caution with windows and doors!

Both of the twins are true lap cats. They are suitable for families and people who don’t mind having a cat on their lap (or head, or shoulder!) at most times. They are snuggle bugs for life and want nothing more than sleep with you while purring their hearts out. These cuddly twins co exist with many other cats, dogs and a toddler. Pipilas and Mpezes have a soft spot for kittens, and they make sure to approach them gently and take them under their wings. Obviously, they share a very strong bond and we only want them to be adopted together. These two are quite emotional and have had a hard time saying goodbye to their brother and sisters therefore we are looking for a family who can show them unconditional love and will keep them together forever.

Our sweet duo is neutered, vaccinated and about 8 months old. They have no street experience so they are meant to be indoor cats, or with a gradual, supervised access to a 100% safe outdoors space. The ideal family would be one with children who know their way around cats. Or a person/couple who spends many hours at home to give them all the attention and love they need. If interested in this very special duo click the pink button for more info!