Journalist Jana Čavojská wrote about her cat tour of Athens with our volunteers Zoey and Thomas for the Slovakian wesbite Plus7Dni. In this English translation of her article,  she shows her empathy for the street cats of Athens and Nine Lives’ daily work to support them.

Many foreign volunteers come to Greece to help refugees and migrants. But there are also those who help the street cats. There is a saying that Greek cats can protect against earthquakes. More specifically, they can predict when an earthquake will happen, and use their behaviour to warn that catastrophe is approaching. That is why, according to folklore, there are so many of them.

The activists from the organisation Nine Lives, however, believe that the high number of stray cats is due to the indifference of the authorities, their failure to implement laws regarding responsible pet ownership and humane stray animal population management. Nine Lives stepped in with neutering, vet care and adoption programmes. And their volunteers take to the streets of Athens every day, around the historic centre of Athens, to feed the stray cats. Last year, they neutered 1,700 cats, and they feed over 450 cats [closer to 500!] daily. When needed, they also cover veterinary care. These two healthy, neutered cats have adopted an art gallery as their part-time home

At 6pm Zoey arrives in front of the Acropolis Museum. She is carrying large heavy bags full of kibble, cans of wet food and water bottles. Zoey is a real cat lover, with all her body and soul. She has two cats at home, MeowMeow and Blackie, whom she pampers. She rescued both from the street. She also takes them for walks to the beach – in a special carrier ordered from Germany. She says they love it. ”Cats are very addictive,” she says. ”You’ve got one and something starts telling you to get another one. And then another one. Because there is a room for one cat in every single corner of your house or apartment.” Besides the cats, she also has Baby, a small dog.

Zoey is a Chinese woman from Singapore and she immigrated to Greece to be with her husband. While working at his company, she finds time to feed cats couple of times a week. ”At first, I just wanted to give them food so that they would not suffer from hunger. Gradually, I found out that each cat has a different character and different needs. Some are strong in character, others need more support. Every time they see me, they welcome me enthusiastically,” she laughs. I soon see this for myself. Cats surround Zoey, rub themselves around her legs, purr and beg for a caress. They enjoy this ‘meeting’ and they escort her to the point where their territory ends and the territory of another group of cats begins. 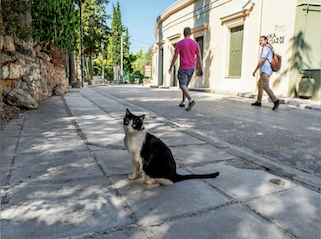 Friendly colony cat Sisyphus waiting for his feeder to catch up; he is more interested in stroking than kibble

“I always smile at cats,” Zoey continues, as we walk through other places where those cuddly furry ‘beasts’ need to be fed. “Because it’s impossible to be with cats and not to laugh.” Many of the cats on the street already have their names. We meet Panther, Mavroula, Batman. Zoey already knows them and can easily recognize them. She knows which one likes to be stroked and which will bite her on her leg if she doesn’t give them a treat. She is not afraid to touch them. “We also provide them with veterinary care. Each day’s volunteer who feeds them monitors them, to see if they’re okay. If he/she notices a health problem, we’ll take the cat to the vet. So we know that they’re healthy.”

Zoey trained her cats to respond to their names. MeowMeow was originally called Twinkie, but she did not respond to that name. At MeowMeow, however, she always turned her head and ran over to Zoey. Blackie is deaf. So Zoey taught him to follow hand signals.

Around the Acropolis, Zoey and I gradually feed a total of about 80 cats. There used to be even more. Some have been adopted and started new lives as home cats.  Others died. They usually cannot survive more than a year on the street, with the dangers of dogs, cars, people, other cats. Except, of course, those who are the fighters. Such a fighter is Max, with a scratched nose. I met him in Plaka, with another volunteer, Thomas. He says that none of the other cats like Max because he beats them up. An old warrior is Skeleton. He lives in a park, not far from the narrow steep streets of Plaka. He is skinny to the bone, but apparently this is more due to his age than his life on the streets.

The adoption of a cat sometimes does not work out. Zoey introduced me to a gray cat, Ivan, who was the only one to survive a dog attack on his colony. ”After that experience, we really wanted to find him a new home. We did. But he could not get used to it. He was meowing loudly, scratching the walls. Unhappy. We found a new, safer place for him, and he settled in immediately and became king of the new cat colony!” Zoey told me.

A new kitten has appeared in a group of cats near a restaurant, whose owner and staff like cats and therefore do not shoo them away. Zoey is trying to gain its trust. Slowly, she disperses some kibble, closer and closer, to attract it. The kitten is gradually intrigued. [This kitten has now been happily adopted.] Thomas is also not Greek. He originally came to Athens for a few weeks from Nice, France, as a volunteer. He works in a refugee hostel, teaches English and feeds cats. He eventually stayed in Greece for half a year and is not yet planning to go home. “Volunteering for Nine Lives has been an amazing experience, especially during lockdown,” he explained. “We volunteers applied for a special pass, giving us permission to leave the house for a specific time each day to feed the street cats. People were closed at home. I could walk through the streets. I had the whole town to myself.” Like Zoey, Thomas gradually fell in love with cats. He appreciates their character. That they don’t cling to humans. That they’re independent. And warriors.

As for the tourists, this summer Athens did not see a many of them. Although Greece has opened up to tourism, one of only a few countries to do so, far fewer people travelled than in previous years. Despite the fact that there were only a few tourists, Thomas met a lot of them. They asked him what he was doing, took pictures with him and with the cats. Being able to feed street animals seemed incredibly precious to them.

With thanks to Anja Jazbinšek for the translation.

Link to the original article in Slovakian: https://plus7dni.pluska.sk/zahranicie/foto-macky-poulicne-malby-vystredni-umelci-15-zaberov-ktore-vam-ukazu-inu-tvar-aten?itm_site=plus7&itm_template=other&itm_modul=clanky-11&itm_position=5&fbclid=IwAR3MSiC1KVl4LMOZr1VIEUB6tQhkpJbh_9lV_ebgqSgbN5PZgKdIK69sL6U